Do We as a Nation Need to Diversify Russian Defence Supplies’ Dependence?

As the world rushes to sanction Russia for its full-scale invasion of Ukraine, India has refrained from criticizing Moscow’s aggression, instead has simply called for “dialogue and diplomacy”.

As the severity of these “unprecedented” sanctions on Russia accentuates, New Delhi’s historic and deep reliance on Moscow for defence supplies are under scanner. India has relied heavily on Russian exports over the past decades and Moscow can leverage that to seek India’s support at the global stage. Meanwhile, the US has maintained that its package of sanctions is also aimed at Russia’s defence capability, apart from its economic and financial institutions.

Considering the current scenario of Russia-Ukraine War, there are two contradictions that India needs to tackle. The first is excessive dependence on Russian arms and secondly, maintaining relations with Quad countries.

India-Russia defence ties are still strong, with deals reportedly worth as much as $15 billion still in the pipeline.

The sanctions may create a problem for these transactions, particularly the $5.4 billion contract for five long-range ground-to-air S-400 Triumf missile systems. The US has previously expressed concerns over the arrangement.

Currently, around 70 percent of India’s military arsenal is of Russian origin. According to Stockholm International Peace Research Institute (SIPRI), Russia is the most important suppliers of defence equipment to India, commanding nearly two-thirds share of the India’s total arms imports.

In 2016-2020, Russia was the biggest source for India’s defence needs, amounting to about 49.4 per cent of all arms imports, according to a report released by Stockholm International Peace Research Institution.

Indian Army’s ‘Main Battle Tank’ (MBT) force comprises predominantly of Russian T-72M1 and T-90S tanks. Indian Navy’s sole operational aircraft carrier INS Vikramaditya is a refurbished Soviet-era ship and its fighter fleet comprises of 43 MiG-29K. Of the 10 guided-missile destroyers, four are Russian Kashin class and six of its 17 frigates are Russian Talwar class. Indian Navy’s sole nuclear-powered submarine is on lease from Russia; besides eight of the 14 other submarines are of Russian origin-Kilo Class. The Indian Air Force 667 FGA (Fighter Ground Attack) fleet is 71 percent of Russian-origin. All the six air refuelling tankers are Russian-made Il-78.

For all the success of the U.S.-led campaign to isolate Russia on the world stage, India has stood out as one major democracy that has been reluctant to criticize Vladimir Putin — and billions of dollars in weapons purchases mean that’s unlikely to change anytime soon.

Prime Minister Narendra Modi’s government is facing more pressure from fellow members of the Quad — the U.S., Japan and Australia — to help push Russia toward a cease-fire. After meeting Modi in New Delhi, Japanese Prime Minister Fumio Kishida called for more cooperation between democracies while noting Putin’s war has “shaken the global order.”

Modi is slated to hold a virtual summit with Australian Prime Minister Scott Morrison, while U.S. Undersecretary for Political Affairs Victoria Nuland – who has helped coordinate the American response to Ukraine – is expected to visit New Delhi later this week.

India, the world’s largest buyer of Russian weapons, is making purchases as these are necessary to counter China’s growing military assertiveness and its other neighbour, Pakistan.

India operates more than 250 Su-30 MKi Russian-made fighter jets, seven Kilo-class submarines and more than 1,200 Russian-made T-90 tanks — all of which are operational for another decade, the people said. In the pipeline are weapon systems worth about $10 billion, including a nuclear submarine to be leased to India and S-400 air defence system batteries.

“Despite efforts at diversification, India’s military hardware is still almost 70% Russian,” said Manjari Chatterjee Miller, a senior fellow for India, Pakistan and South Asia at the Council on Foreign Relations.

The cost for India to replace all of its Russian-origin equipment is daunting. The country’s entire defence budget for 2021-22 is $70 billion, and a long-delayed plan to procure 114 fighter jets to replenish its fleet and replace some older Russian fighters is estimated to cost India between $15 billion and $18 billion even if produced domestically.

Still, India will find it hard to maintain a “truly neutral position” without alienating the U.S. and other Quad countries particularly because Russia has viewed New Delhi’s positions as “silent support”.

The Ukraine crisis is not a geographically confined regional European crisis that does not affect India. It also has implications for the future of the liberal international order. 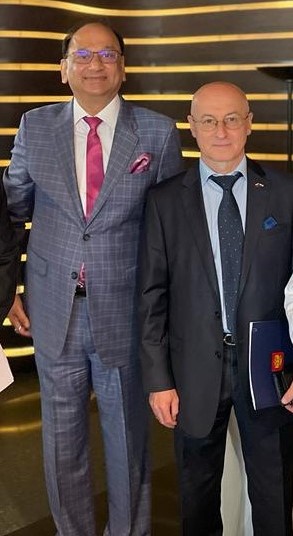 Indian-Russian conference “Trade and Industrial Dialogue and Business Cooperation” held in New Delhi on May 30th,2022, as part of a Business Mission to India